Second Time Around: Some Thoughts on Remarriage RELEASE

Hello, sweet one. If you have started dating and you’re thinking about getting remarried or if you already are remarried, I have a new resource that I created just for you. 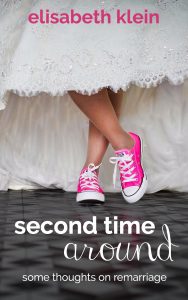 Second Time Around: Some Thoughts on Remarriage

I’ve been a Christian since I was fifteen, trying to live my life for Jesus, trying to follow God’s leading.
And then I was married for almost nineteen years. It was a painful marriage filled with destructive habits like emotional and substance abuse and codependency and anger issues.
And then I was a divorced single mom, raising two teenagers, trying to heal, and trying to figure out who I was and what I wanted the rest of my life to look like.
And then I began dating and fell in love and married a good, good man and we lived happily ever after. The end.

Yes and not exactly.

I am married to a man who loves me deeply, who cherishes me, who treats me well, who supports me. And we are both bound and determined to have a marriage that looks nothing like our first ones.

So we did premarital counseling and we read books on remarriage and step-parenting and then we dove in. But we are both human and life is hard and marriage is hard and parenting is hard and remarriage is harder than marriage and step-parenting is harder than parenting. And one habit we wanted to cultivate in this marriage was taking time on a regular basis to stop, to sit together, to read Scripture, to read something encouraging, to pray. So I combed Amazon for couples’ devotionals and found a few we liked very much, like John & Stasi Eldredge’s Love & War and Gary Thomas’ Devotions for a Sacred Marriage. Both were real, honest, authentic books that didn’t sugarcoat what we’re up against in marriage and what it takes to build a lifelong relationship.

But something that even those stellar devotionals lacked was a quality that I at first found hard to articulate, but now I realize what it is.  It’s not something that is left out necessarily from these and other couples’ devotionals we’ve read as much as it is something that is said and therefore implied. There are warnings upon warnings of the effects of divorce – on the two people directly involved, on the children of the divorcing couple, on the Church and on society as a whole. And as a couple who have been through divorce, we know that. In fact, we know that more profoundly than the couples who have written the devotionals themselves. Because we have been through it. We know that it is one of the closest things to hell on earth. And so when it is pointed out to us on a Saturday morning while sitting on the couch together sipping our coffee and tea and trying to get closer to God and each other, I noticed that shame was encroaching on our time together, reminding us of our past mistakes, of our failures, of our sin.

Now, please don’t get me wrong: we know we have a past, and we can’t sweep it under the rug that we don’t, and we know we have failed and have sinned. But in further reading, I came to the conclusion that I/we have something to offer that “regular” couples’ devotionals don’t and that is a real-life perspective.

We know marriage is hard. (So do you.) We lived through ones that failed. We know what it takes to keep a marriage running, and we couldn’t one time before. But we’re not in regular marriages. We are in remarriages, which are entirely different ballgames.

Because remarriage is so very different from marriage. There’s all that is at stake in MARRIAGE. And then there’s the RE that adds another level entirely.

So I want to offer you who is more than likely trying dating and marriage again with much baggage, with some fear, and with huge doubts about your own ability to make this one work, but also who is trying dating and marriage again with faith in God, with hope in your healing, with trust in yourself and your husband that this time can and will be different IF you do things differently.

You can get your copy here.