I am now the wife of an Illinois High School Association official. In other words, I’m the 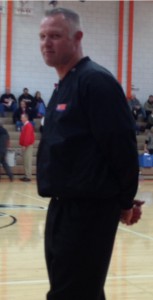 wife of a high school football and basketball ref. At first, when we were dating, I thought this would be so totally fun.

But then I went to a few games. And watched my then-boyfriend (and then-fiance and now-husband) get yelled at. Quite a bit. (And, well, I maybe yelled back once or twice. I know, not cool.)

In fact, I went to the extent to actually say this in our wedding vows: “I promise to go to your games to watch you ref and try not to yell at fans when they heckle you even though I get all protective.”

For some reason, as a basketball mom these past several years, it had never crossed my mind how parents treated the refs, but now that I’m married to one, I’m hyper-sensitive to it.

I was recently at an away game of my son’s. The fans (aka parents) were so obnoxious – and I will go so far as to say downright mean – to the refs, that I actually got up and walked to the other side to sit in the stands of the opposing team. I was mortified. And here’s why, I think.

One, refs are simply human beings. There are typically three of them, but it still is hard to catch everything. However, for the most part, I think it’s safe to say that they are doing the best they can.

Two, we are modeling this behavior for our children who are sitting in the stands with us. In fact, that night with the all yelling, I saw a bunch of high school kids a couple rows down yelling at the refs too. I wonder where they got that idea or why they felt they could yell at adults? And, don’t even get me started on the players who do that shoulder shrug and throw their hands up and look at the refs like they are idiots when a foul is called on them. Talk about showing utter disrespect for authority. The lack of maturity disgusts me.  And they are learning it from us.

Three, can you imagine walking into your kid’s classroom, and while the teacher is teaching, standing in the back, yelling, “WHAT A CRAPPY LESSON! YOU’RE A HORRIBLE TEACHER!!!” Or walking into Starbucks, and yelling at the barista, “THIS COFFEE IS TOO HOT! YOU SUCK!!!” What other arena is it considered socially acceptable to walk into someone’s place of work and YELL AT THEM while they’re trying to do their job?

“YOU MISSED A SPOT! YOU CALL YOURSELF A PAINTER?!?”

“HEY BLINDIE, YOUR HOME INSPECTION SUCKED! GET ANOTHER JOB!”

Would you want to be yelled at every time someone thought you messed up at work? Yeah, I didn’t think so.

Fourthly, have you ever noticed that no one ever yells at a referee for a “bad” call towards the opposing team? Which means, basically, that referees aren’t idiots, but instead parents and coaches and students are biased.

Fifthly, umm, can I point something out? A, it’s only a game, and B, they’re only kids. Oh my lands, chill, people. I wish you could see yourselves. You look RIDICULOUS and I’m embarrassed for you.

And lastly, if you claim to be a follower of Christ and you’re acting that way, not only should we be at the very least as respectful as those who don’t claim to know God, we should be EVEN KINDER. Meaner is simply unacceptable.

My husband says that in the twenty-plus years he’s been reffing, he has only seen it get worse. He has heard it all: “three blind mice”, “you’re missing a good game”, “he didn’t fall down on his own” (uhh, yeah, a lot of the times our overdramatic teenagers actually do fall down on their own), and lots of being cussed at. (Lovely, grown-ups, lovely.) It’s just so sad.

So here is my suggestion: next time you’re about to yell something at a referee (or a coach or an opposing team’s player, for that matter) at one of your kids’ games, try remembering this:

Let the coaches coach.
Let the kids play.
Let the refs officiate. (Or, take the courses and pay the fees and take the exams and go to the workshops and put the time in and become an official yourself, if you think it’s such a piece of cake.)
And as parents, try just having fun and supporting your children. Respectfully.  (For the love, it’s just a game.)

Let your gentleness be evident to all. The Lord is near. –Philippians 4:5