I am Woman, Watch Me Finally Freaking Stand Up for Myself 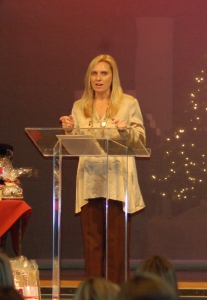 A ways back, I was booked for a speaking engagement. There had been some history with this one: they had cancelled on me during my separation a few years earlier, so I was hesitant to say yes. But my knee-jerk reaction was that this had the potential to be a full-circle redemptiony kind of thing. But then I panicked. It was new leadership which meant they didn’t know there was a history, so I emailed them back and told them the story (you know, that I was a “divorcee” and had been cancelled on previously and such) and asked that they get the go-ahead from the higher-ups first before we moved forward in an attempt to avoid further humiliation on my part.  They did, and I said yes.

Time passed. The week before I was set to speak, I got a call saying that there were two conditions to my upcoming speaking engagement.

The first was that I not mention my divorce in my talk.
Umm, o-k-a-y…OUCH. (I totes love censorship.) (Plus, it was a Christmas talk, OML.)

The second condition was that I would not be able to bring any of my books that had to do with marriage or divorce.
(Jaw dropped on floor…gut successfully kicked in…shame flooded my soul and mind.)

I was so thrown by this. But in the moment, I responded the way the old Beth would’ve responded. I stammered that I understood and that it would be fine. And then we hung up. And then I got pissed. And then I sent an email saying I needed 24 hours to decide if I were going to still speak or not.

But then the newer Beth took hold of the reins, and as soon as I hit send on that inappropriate email, I called the person back, and we talked it through and I told her I was so thrown by these requirements and that I felt so humiliated and hurt and disappointed but that I would not be cancelling on her.

But that was not the end of it. I was very upset. Shame had just been poured back all over my heart. And, by the same people. (Hurt me once, shame on you…hurt me twice (or a dozen times), shame on me…and for the love of all that’s good and pure in the world, wake up, Beth!)

So, I stewed for a few days. And I dreaded. And then a little shift happened in my heart.

Because I was prayed up. And I was being prayed for. And I asked Jesus to use me and speak through me and protect my heart and mind. And I went and gave the talk.  And I was a professional. And I gave it my all. And I talked with a few women who told me that something I said had helped them.

And I could have left it at that. But I didn’t.  Because afterwards, I did something that only the newest Beth could do. The one who has been through the fire of relational abuse and spiritual authority abuse. The one who is so sick and tired of other people telling her who she is and what she can and cannot do and what she can and cannot say (because of something in my past THAT GOD LED ME TO AND THROUGH, or for any manner of reasons).

I walked up to the gal in charge. (She had just been the messenger. She had nothing to do with all this except to be given the task to impart terribly awkward news to someone she didn’t even know. And she had done it with as much grace as a person could do it.)

And so I said this to her, while holding her hands and looking her in the eyes, “You have been so kind to me and so gracious to me and so welcoming to me. But I have a favor to ask. I usually do this kind of thing over email but I’m trying to be more grown-up. I don’t want to presume I will be asked back to speak here again, but would you please take my name off your speakers’ list? This week I realized how important it is to me to only go where I and my entire story are accepted completely. And I need to close the door on this place.”

She hugged me and told me she understood.

And I walked out with my head held higher than it had been in ages. Maybe ever. I had stood up for myself, in person, with respect for myself and for the person I was speaking to. I had declared what was important to me: my integrity, my dignity, my story in its entirety, and that I have nothing to be ashamed of anymore; and I was saying no to this organization ever being able to hurt me again. No more humiliation and shame from this church.

I walked away feeling strong and free and grateful for how ridiculously far Jesus has brought me. So, as it turned out, it was a full-circle redemptiony kind of thing after all.

Then I will make up to you for the years that the locust has eaten… Joel 2:25a

If you’d like to help me reach more hurting women with help and hope, consider supporting my work here or booking me for a speaking engagement, click here.