Who Needs a Man? - Elisabeth Klein

Who Needs a Man?

I left behind my almost nineteen-year marriage – and the first forty years of my life actually – with this one unspoken but deeply-held belief: 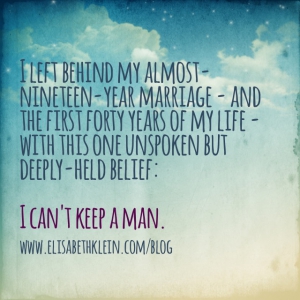 A dissertation fills up that little sentence:

I didn’t have what it takes.
I wasn’t fill-in-the-blank enough. (Pretty enough, funny enough, smart enough, laidback enough, et cetera…)
I wasn’t worthy of whatever.
I’m so something that someone would have to numb themselves to be with me.
I’m needier than the next girl.
I’m boring.
I’m a disappointment.
I’m too much this and not enough that.
Blah blah blah.
You get the gist.

And so, when I divorced, I honestly believed I was finished with marriage as a whole. I had no intention, truly, of ever dating let alone remarrying.

Jesus and I went on to very slowly pick up the pieces of my life and, finally, I started becoming the woman I was always intended to be.

I mothered. I read. I wrote. I had friendships. I created a ministry. I rested. I healed. I became.

And it was a beautiful, clunky four-year season of my life that makes me smile with deep wonder and gratitude.

To quote a friend recently, “You were ironically totally fine on your own.”

I was fine post-man and then I was fine again pre-men.

But then something happened about two years ago. I began corresponding with someone, which led to a several-month long-distance friendship, which ended (obvi) but which woke something up in me that was pretty profound, and I became convinced of this:

I was made for partnership.

Well, I tried online dating. And had five first dates, only one of which was followed up by a second date. And then a third through one-hundred-and-ninetieth date, which was my wedding to Tall-Shadow.

And now several months later, I am married to a kind, tender, generous, attentive, affectionate, supportive, strong, sweet man who loves me well.

But life is funny.

Exes and lots of children and we don’t really live together full-time just yet, and it’s been harder than we expected, harder than hard, messier than messy.

And requoting my friend, “You were ironically totally fine on your own.” And I was.

But now…now that I’ve tasted and seen that love can be truly good, I’m all upside-down and twisty.

I said to my husband recently, “My number-one highest human need right now in this season of my life is time with you, hands down.”

And I frankly don’t know if that’s healthy or not. Or biblical or not. (I don’t say that to the exclusion of the sweetness of my relationship with Jesus…that will be a given as my highest priority for the rest of my days, I boldly proclaim.)

But what I mean is this: though I learned the first several decades of my life to be just fine without a man, now that I have one – and a good, good one at that – I want and need him.

And what I mean is this: though I’m an introvert who loves being home alone, I want and need my husband more than I have him because of our wonky circumstances.

And what I mean is this: recently, there have been a handful of times that he has either taken the day or half-day off work or he has cancelled something or he has come home when he wasn’t planning on coming home, and just in him telling me he was going to do those things, I could literally feel something in my body and heart and mind calm down and resettle and breathe a deep, deep sigh, with serotonin releasing through my veins as a comforting gift.

His time and sacrificial love, I’m sensing, are bringing me back to life.

Is it wrong that my number-one highest human need right now is time with my husband? I don’t know. And frankly, I don’t care. I just know that I’m so thankful it’s not the flipside…my struggle could be that I am thrilled when he walks out the door and cringe when he walks back in.  But that is not my reality any longer. My reality these days is longing for the man I love.  And even though it’s hard, I am so grateful.

If this post resonated with you, consider supporting my ministry to help hurting women by bringing them hope.