He, of course, was a Christian. Meaning, he could name the date when he asked Jesus into his heart.  You know, because that’s what it says in the Bible. (No, it doesn’t.)

He took his family to church every Sunday morning. And every Wednesday night, if Wednesday night church were something his church offered.  Which it should.

If he didn’t lead a men’s group (which he should, even if encouragement and teaching and shepherding weren’t his spiritual gifts), he at the very least participated in one every week.  Along with, duh, participating in a couples’ small group weekly.

He had his own quiet time, in the morning before work, every day.

He did devotions with his wife, at least weekly, that he initiated. All his idea. No nagging necessary.

He did devotions with his family, at least weekly, that he initiated. All his idea. No prodding necessary.

He did not drink, heaven forbid.

He did not waste his time by watching too much television, even if his wife were perhaps a TV-aholic.

He worked on the honey-do list without being asked, as a way to die to himself like Christ died for the Church.

I believed all these things, whether I verbalized them or not, for many years.  Not only am I not sure where I gathered these images and how I compiled this version of a Christian man/husband/father, but even as a Christian woman who loves Jesus very much, I not just cringe now, I almost think ew. That image seems flat to me. And so boxed-in. And where is his personality? And where is his life? And isn’t he exhausted? And where is the abundance in all of this?

I was once a woman who held this standard up as God’s truth and criticized and nagged a husband into the ground (who did a lot of things right but I was just such a Pharisaical b$#@! I rarely noticed) and who now is a woman who – as hard as it is for me to believe – holds so loosely to all of these things that they have basically fallen to the ground.

Because I have a sweet, sweet husband, and he loves God and is a hard worker and sits with me about once a week and reads a devotional with me and goes to church 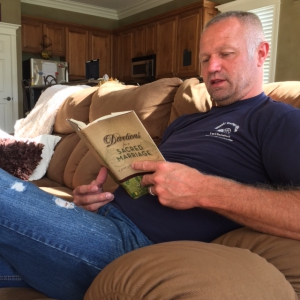 with me on Saturday evenings and I am overwhelmingly grateful for who he is and what he brings to the table and how God has created him and how he has added joy to my life and heart.

But he does not live his life based on my made-up list. (Thank you, Jesus.) First of all, that sweet man is being stretched so thin these days that he probably doesn’t know if he’s coming or going sometimes, so there absolutely must be grace flowing back and forth between us, especially right now in this transition and limbo season. But on top of our current circumstances, my perspective has shifted in important ways. I even believe now that sometimes you can miss church and lightening will not strike you dead. And I even believe now that people learn differently. And I even believe now that small groups are great, if you have the time and they add to your life. And I even believe now that you can serve wherever you are, using the gifts God gave you, and it can look like a thousand different things. And I even – wait for it – believe now that Christians can drink. Re-freaking-sponsibly. For the love. (Total side note: I shouldn’t even have to say this, but Christians – or anyone for that matter – who have an addiction and those who have a predilection to addiction should not drink and should get help for their addiction, because there is help available.)

I even wrote in my vows that I promised to accept him for who he is, and that I would remember that he already has a Holy Spirit and that I’m not it.  That’s how paramount this is to me now, this idea of letting him just be who he is, making sure he knows that who he is right in this moment is more than enough for me, that he has what it takes to be a man and a husband and a father and a friend.

Now, some of you have husbands who fit that mold, that made-up list of mine. And you are now upset with me.  To you, I am sorry. I am not trying to offend. I’m just trying to expand our thinking a bit. In fact, I will concede that some of you have husbands who fit this mold and who are also very alive men who aren’t being sucked dry but are being fed by all of these things that they are doing, and that is wonderful.

But some of you have longed for your husband to be and do all of these things, like I used to, and you just might be slowly taking apart and killing his manhood by implying – or outright telling him – that he needs to become this kind of man to be the man he’s supposed to be.

Caveat: I am not saying that if he’s got a rampant addiction or is a serial adulterer or is abusing you or your children that you just – la dee da – magically choose to love him and respect him and accept him.  NO. In that case, you prayerfully tell someone and set boundaries and get the help that you and your husband and your children need.

But if you have a husband who is a hard-working man, who tells you he loves you and treats you in a loving way consistently, who goes to church, who reads his Bible from time to time – oh my lands – be so very grateful. Stop telling him what he’s doing wrong and start thanking him for every single thing he’s doing right.

You love and accept and be outwardly grateful.  You work on your own walk with God and you take responsibility for the life God has given you. And you let God be the changer, if any changing even needs to be done.

If this post resonated with you and you are struggling in your marriage, Surviving in a Difficult Christian Marriage can help you.