What I’m Doing Differently in My Relationship

There are so many things that I’m doing differently in this relationship with Tall-Shadow compared to my marriage that I’m practically not even the same woman. He wouldn’t recognize the wife that I was.  (Thankfully.)

But I wanted to share the two main areas that I am handling differently, and they may surprise you.

First, I’m not taking any crap.  (I so wish this weren’t a Rated-PG blog because I want to phrase that sentence another way pretty badly. But I won’t. Anyway.)  Now, this implies that Tall-Shadow doesn’t treat me well and I’m having to constantly fight it back and keep it at bay.  To be clear: he treats me amazingly well.  In fact, the closest we get to me “not taking crap” is when he’ll occasionally say something that I completely misconstrue, I then get defensive which leads to me doing my Oprah/z-snap/oh-no-you-di-int thing, at which point he kindly says it’s not what he meant, and then I apologize. 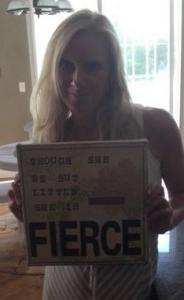 But even this is my point.  Because the old Beth would’ve gotten defensive deep down inside. And would have cried. Or held it in. Or journaled about it. Or told a friend. BUT THEN DONE NOTHING. AND TAKEN IT. AND DONE WHATEVER I WAS TOLD TO DO. OR ACCEPTED THE NAME I WAS CALLED DEEP DOWN INSIDE MY HEART. OR YELLED WHICH GOT ME NOWHERE. Or any manner of combination of unhealthiness.

But now, if I even think I catch a whiff of being told what to do or even a differing opinion (heaven forbid), the claws come out. (Yes, I have perhaps swung to the other end of the spectrum, poor Tall-Shadow. I’m working on it. Thankfully, he is so kind, patient and gentle with me, that I’m declawed in about 4.5 seconds.)

So, number one different way I’m handling my relationship is this Beth is no longer going to be walked on.

And the second thing I’m doing differently is this: I am not going to try to change anyone else, especially the man I’m in a relationship with. Like ever again. This was one of my largest areas of failure in my marriage. I was a controlling, critical nag. I had rules in my head of what a Christian man and a Christian marriage should look like and when we weren’t stacking up, I did everything in my power to make us fit into that made-up mold, to the detriment of my then-husband and the downfall of our then-marriage.

So one of the things I’ve learned, in large part due to the lack of grace I was shown from other Christians at times through my separation and divorce and from the beauty of huge grace shown at my church, is that God created us each uniquely. It’s not my place to tell someone how to live their lives or how to figure out their faith. It’s my job to live my life the best I can and to celebrate and enjoy and love other people.  And that’s what I’m working on with Tall-Shadow.

First of all, it helps that there’s really nothing I would change about him in the first place (yes, I’m head over heels, what can I say?). But secondly, even if there were things, I am choosing to be grateful every day for who he is, and leave any changing and transforming up to him and God…because it’s their business, not mine.  (And again I say: we are not our boyfriend’s or husband’s or ex-husband’s mother or parole officer or judge or Holy Spirit, so let’s just collectively back-off, shall we?)

Now, I don’t mean that if he started to hurt me on a regular basis, I’d just sit back and take it (refer to lesson one I’m learning). I wouldn’t celebrate and be grateful for abuse or addiction. Not in a million freaking years. But what I mean is that he and I are vastly different. And that’s wonderful. Though we have a ton of stuff in common, we do life differently, we’re both old-ish and have been doing things a certain way for quite some time, and we’ve both been single for awhile now.  But so, instead of me thinking deep down that he just needs to conform to how I think and behave and whatever and then everything will be peachy, I can just let him be. Just let him live his life.  I don’t need to make him do anything. I don’t need to try to manipulate situations. If there’s something I want to bring up to him, I will. Gently. Once. And then I’ll drop it (or at least try to…okay, I’m working on this one).  And then I’ll go focus on living my life and I’ll thank him for loving me so well.

In other words, what I’m putting into practice this time around that is the polar opposite of what I did in my marriage is this: I’m being me and I’m “letting” him be him. I’m pretty good at knowing right away how I feel about something. And, though this all took me a couple decades, I’m now super okay with standing up for myself. I will not be walked all over ever again.  And gratefully, I’m with a man who has no intention of ever trying to do so. And I don’t want to be a person-changer. It’s not my job, it’s God’s.

I want to be known for being the woman God created me to be and for allowing everyone else in her life to be the same thing. And hopefully, this time around, that is exactly what is happening.

Thank you for making me so wonderfully complex! Your workmanship is marvelous! –Psalm 139:14a

If this post helped you, I would encourage you to check out “Living through Divorce as a Christian Woman”, found here, or “Unraveling: Hanging onto Faith through the End of a Christian Marriage”, found here.