I Signed Up for Online Dating

So it’s been a little while since I proclaimed all in one post that I had fallen in love and that it was over. But one of the huge life lessons I took away from that sweet time is that I do indeed crave partnership, despite what I had previously convinced myself: that I’d be just fine on my own the rest of my life.  And so I told one of my best friends shortly after it ended that I was giving myself four weeks to grieve and overanalyze and then I’d sign up for a stupid dating site.

(And I must credit said good man because without him and his building me up for those five months, I’m not sure I would’ve had the courage to pull the trigger. So thank you, my friend.)

So, yes, I signed up for online dating.  (And no, this is not what I wrote on my profile, but I totally wanted to.)  And let me say that joining a dating site in your forties is like proclaiming to the universe that you indeed want to re-enter high school and all its awkwardness and self-consciousness and angst.  Good times.

I’ll start by saying why I decided to do the whole online dating thing, despite how I feel about it. Let me think through how many local, single, godly men I know.  Give me a minute.  Oh yeah, one. And I gave birth to him sixteen years ago. So there’s that.

My best friends are girls.

My guy friends are married.

I work at my kitchen counter. And not a lot of cute, Jesus-loving, 40-something men hang out in my kitchen. (Though I’m hoping that changes soon! Bada-bum.)

I speak to women.

I write for women. On a  hot pink blog.

I go to a great church but there seems to be mostly couples and the single women outnumber the single men by like a zillion to one. (Hey men, head to The Orchard! You can thank me later.)

I walk my dog in my neighborhood. Filled with families. (Though I do get the occasional catcall from teenage boys as they drive by, to which I usually graciously yell back, “OLD ENOUGH TO BE YOUR MOTHER!” Super classy, I know.)

And I go to the grocery store. And I’m not about to walk up to a man in the produce section and ask him his sign or how to tell if an avocado is ripe or whatever you people do these days.

And that’s about it. Seriously.

So yeah. I figured unless God brings the next man to me the way he brought the last one (and I’m not revealing how he did that), if I want to meet someone, it’s pretty much online dating or seemingly nothing.

So I signed up. And I pretty quickly started getting messages. I swear I had to practically breathe into a paper bag the whole time.  Some messages, oh my lands, I’m just so naïve.  Just outright, first message, not even asking my name or anything, but jumping right to “dinner and drinks?” Umm, no. Especially if you’re nine years younger than my Dad. (No offense, Daddy, but c’mon.)

Or the “smiles”.  What a stupid, inane concept. Listen, buddy, if all you can muster up is hitting the button that sends me a “smile” and you can’t even be bothered to replace the ridiculous canned message with your own words, I delete you. Woo me, people. Two clicks does not a wooing make.

But then a few came in that looked…interesting. (In a good way.)  So I started an Excel spreadsheet called, concisely, “MEN”.  Yes, I made a spreadsheet.  Have you just met me? Of course I made a men spreadsheet.  I was up to eight guys at one point, and I didn’t want them all confused in my head. And then once I realized I would be communicating with more than one at a time (which had never crossed my mind for some reason), I started pulling all our email communications into separate Word documents so I could really remember who was who. It was like the freaking Bachelorette.

And then a turn came, and I realized I was really kind of interested in just two.  Hmm.

So one evening, I did this: (I know…I look ridiculous.) 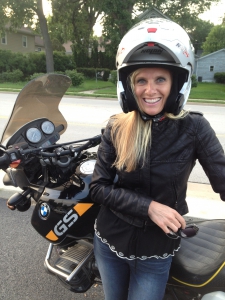 So, I pretty much knew in one date that I didn’t think he was the one for me.  But I wanted to keep an open mind, because, I don’t know, I guess I figured that’s what you do, so I agreed to a second date with motorcycle man.

So the other one and I talked on the phone the next day, and it was crazy easy. An hour flew by.  And we decided to meet the next night.  And it was super connecty, filled with promise.

Ahh, but then. Well, life is funny sometimes.  We spoke the day after our date and it was going great until he asked me what I was doing the next night and I replied that I had set up my already-agreed-upon-before-meeting-this-man-second-date-with-the-motorcyle-man. That apparently did not sit well. And some unkind words were said to me sort of out of jealousy or something.  Wait, what?? We’ve known each other for, like, five minutes. And we’re on a dating site…I thought this is what you’re supposed to do.

And though he sent me several apology texts, which I appreciated, and though my counselor told me I live a lifestyle of grace dispensing (perhaps implied: occasionally to my relational peril), and I, of course, forgave him…umm, well, that kinda freaked me out.  So I promptly pulled my profile down and now I’m taking a man-break.  After only eight days. Gotta protect this heart, girls.  I’m not saying I’m out of the game permanently, just benching myself for a little while so I can reassess.

So my lessons learned and my advice to each of you out there in the dating sector: boys can be kinda funny sometimes and life is odd and it can be a little bit weird out there. I’m kidding…I learned more than that…and I’ll tackle that next Wednesday. But in the meantime, be careful, sweet ones.

So, tell me, if you’ve tried online dating, what are one or two of your best tips?

If this post encouraged you, you would benefit from “Unraveling: Hanging onto Faith through the End of a Christian Marriage”, found here or “Living through Divorce as a Christian Woman”, found here.