I’ve been alluding lately to some things in my life that are leaving me uncertain and ever so slightly unsettled.  But I started noticing something bubbling up in me and it was disconcerting for the following reasons:

I was healthy.
I wasn’t hormonal.
I was getting enough sleep.
I was getting outside and getting exercise as Spring has finally arrived.
I was eating right and taking my vitamins and drinking more water than I usually do.
I was serving.
I was spending time with my friends.
I was in a sweet season of mothering where nothing is awry.
I was having consistent time every morning with Jesus.
I was doing work I love.

And yet, I felt…..off. My life felt weird. I realized that for a few months I have felt like I wasn’t recognizing myself. I was, in essence, crawling out of my skin. I didn’t want to be the me that I was, or something. I don’t know.  But it was freaking me out and I had to just get out of town. 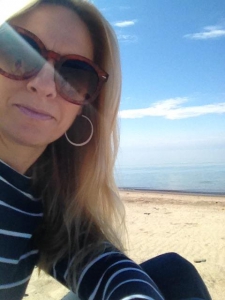 And I spent extra-long amounts of time journaling and thinking and praying and crying and asking Jesus to speak to me and to heal me and to fix things in me that I am just so freaking tired of still battling after, what?, twenty-plus years.

In the days leading up to my time away, I was dealing with what I now refer to as “swirly panic”.  I wouldn’t say I was having anxiety attacks by any means, but something in me was shaky and off and I wanted it to stop. And then in the moments before I got into my car to leave, I was nervous.  I was raw. I had that lump in your throat when you know you’re about to cry.  I’ve left my house before. I’ve driven to Michigan before. I’ve gone plenty of places alone before. I used to do solo retreats two times a year. But I was – no other word for it – scared.

But I realized that I was equally afraid of two things: that Jesus would say nothing to me AND that Jesus would say something big to me that would be yucky.  I texted that to my mentor and she replied, “Let Jesus be Jesus. You are loved.”  (Love her. Get a mentor, people.)

I’m not going to go into all the things that ended up transpiring between me and Jesus, because most of that is for us (though he did whisper to me that he’s not the creator of “swirly panic” but of peace…..oh snap!), but I will share one gem that hit me deeply and brought a settledness to me that I believe someone needs to hear, even if you know it already (as I did).  Ready for the deep-heart truth??? 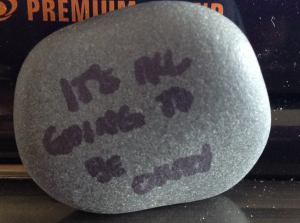 (Isn’t almost the whole point of Jesus is that no matter what happens to us we’re going to be okay?)

I almost kicked myself when that came to the surface, even saying out loud on my walk to the beach, “I had to come all the way to Michigan for that?!?”  Yes, yes I did.

And so, sweet ones, if you are feeling off in any way, listen to that. It could be your body, it could be your mind, it could be your heart. Take that sensation seriously. Take it as a sign to check in with yourself. Ask Jesus what might be going on with you, and then, S-L-O-W down and Q-U-I-E-T down enough to listen, really listen.  Because he wants to speak to you, if you only have the ears to hear.

If my work has encouraged you and you’d like to partner with me as I reach out to help hurting women, click here for more information.