Digging Around the Past 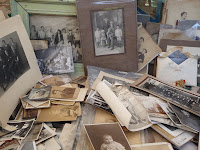 A friend of mine from high school once told me I was nostalgic. For some very odd reason, I took it as a slam. I think at the time I thought she meant that I held onto the past or lingered back there as opposed to living life in the here and now. I never asked her to clarify, so I don’t know her motives, but I realize that she was right. I am nostalgic in the best sense of the word and in the worst sense of the word.

I love to soak in memories of really sweet times and be grateful for the gifts in my life: good nostalgia. But I also can be a bit of a curmudgeon, turning into one of those grouchy old ladies, where I rehearse and rehash all the wrong that’s been done to me: bad nostalgia.

Last week, I was driving through town and caught a glimpse of a car that is the same color, make and model of the car of an old friend. More accurately, a friend from my past that is no longer my friend. My eye immediately went to the license plate to see if it were her personalized one. Of course, it wasn’t, but it struck me that TEN YEARS LATER, I still look for her plates. (As if I’d turn my car around and chase her and beg her to tell me what I did wrong to tank our friendship…not that I’ve ever fantasized about that or anything.)

But this time was different. Because this time I was literally in the middle of listening to a sermon on forgiveness. So I just told Jesus right then and there that I had messed up that friendship and that I was sorry. But that she had hurt me too. That I had done everything I could think of to reconcile it, but reconciliation takes two, and apparently I hadn’t meant enough to her for her to make the effort. I told Jesus that even that part of it grieved my heart. I then begged him to help me finally let this darn thing go, to fully forgive her, and to not look for license plates anymore.

Here’s where He got all God on me. Later that same day, my daughter and I were working on a school project about her family, and we were rummaging through old pictures. In that pile I came across a picture of something very, very kind that past friend had done for me all those years ago. I asked God right then and there to make that small memory the thing I think about when she comes across my mind. That I no longer think of the hurt and what feels still so unresolved, but that I think of that one memory. Sort of like being able to choose your absolute best photo as your driver’s license picture instead of the one they force upon you. I changed my picture, changed the image. How good of God to meet me in my request of a ten-year-old hurt all in the same day.

But it gets better, as only God could do. I ran into that friend THAT night. And I walked up to her and I said hello and I told her that I stumbled upon a picture of that act of kindness she had done for me and I thanked her again and told her how much it meant to me. She looked at me with a bit of dislike masked behind her smile, but I gave that to Jesus. And then I walked away knowing that God had healed a deep wound in me that day, all in that one day, all because I gave something up to Him and invited Him into it. Only God.