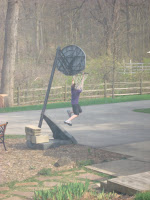 A few things have converged in my son’s life over the past couple months. Back in the spring, he and I began reading Take Your Best Shot by then-nine-year-old Austin Gutwein, the story of a boy who decided he didn’t want to wait until he was all grown up to do something big for God.
Then Jack decided he wanted to attend a Christian school and after a few months of praying and investigating, we moved forward with that decision. In doing so, I found out that Jack would have assignments to complete before school started up again. Yee-haw. I’m such a fan of homework (see http://elisabethcorcoran.blogspot.com/2009/09/homework-woes.html). Let alone SUMMER homework.

But part of his homework is to read a book called Just Like Jesus by Max Lucado (and write a detailed book report on it) and it’s been needling both of us, albeit in very different ways. Today’s reading was Mr. Lucado’s take on what the leper must’ve felt who was healed by Jesus. Jack wrote that it reminded him of being at Feed My Starving Children earlier that day.
Jack went with some friends for a packing session today, where they packed meals for children in third-world countries. While we were reading tonight Just Like Jesus, he said, “Did you know that for only ten dollars, you could feed two children for a month?” “I didn’t know that, bud…that’s amazing,” I said.
And then I could tell his mind was going. We’ve been kicking around the idea for months of ways he could use basketball to raise money for Africa, like Austin Gutwein did, and these books and today’s packing session all came together for him.
So I prayed with him before putting him to bed and asked Jesus that if He thought this were a good idea, that He would help us be creative and make it happen. When I stopped praying, Jack said, “I think I know how we’re supposed to do this.” I grabbed a notebook and took down his thoughts. It was pretty sweet. I pointed out that the Holy Spirit just told him what we should do. I gave him a kiss and told him we’d work on it tomorrow.
He came and got me a few minutes later to show me something. He pointed out what when the light hit the wall across from his bed, the shadows looked like letters. He told me he was asking God to help him see what it said in case it were a message, and before he could tell me, I saw it, “B A L L.” “I think it says ‘B A L L’,” Jack said. Now, it wasn’t like the handwriting on the wall with Daniel or anything, but it was clear enough that I teared up. “Jesus must be trying to encourage you, hon,” I said. “I’ve never had Him do that for me before,” Jack said with a smile. “Jesus is cool that way, baby,” I said as I walked back out, with my own big smile.
Jack came back out a couple minutes later.“I think it maybe also says ‘F A I L’,” he said, looking dejected.“Jack, which word do you think Jesus would be saying to you right now — BALL or FAIL?”“Ball,” he answered.“Then we’re going with that,” I said reassuring him.
The lessons here are many and deep, but I’ll just point out a couple.God can speak to us at any time and in any way.Never discount what God wants to do through a child.Always acknowledge a God-thing…I think He loves it when we give Him credit.Encouraging our children’s very personal walk with God will build their faith and our own.And for heaven’s sakes…when the writing on the wall is positive, assume it’s from Jesus.

If this post helped you, “Moving On as a Christian Single Mom” is for you, found here.