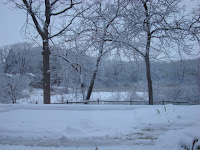 I wish you could see where I live. It’s actually smack dab in the middle of geographically-boring Illinois but I have to pretty much take back roads wherever I go, which is something I’ve always longed for. I don’t live out in the boonies by any stretch of the imagination, but it’s enough of a jaunt to get anywhere that it gives me time to really take in the nature that’s along the way. And just today, as I was taking in the fact that it’s the day after Thanksgiving, that I have Christmas music playing constantly (quite unlike me), that my tree is up, that most of my shopping is done, that my family letter is written, and that it’s that in between moment in time where it’s pretty cold but I’m still in my fall coat but wishing for snow that isn’t here yet, I started to think about seasons.

First, I’m hugely grateful that I live in a place that actually has seasons (someone please make me read this again in February). I absolutely love that everything has its time and place. That just when we’re sick of gray days, snow comes. And just when we’ve had it up to here with the snow, maybe literally, the sun peaks out and leaves start to bud. And just when we can’t stand any more rain, it’s hotter than hot and we can walk around in tank tops and flip flops. And when the heat has worn us down, the leaves start to change into brilliant colors and the sky is the bluest blue you’ve ever seen. It’s long enough to appreciate, then gone long enough to miss it and want it again by the time it rolls back around.

Right now I’m in a sweet season.It’s quiet and slow paced.It’s full of things I love…writing, speaking, reading, friends, days at a time in my jammies, sitting on my couch with a cup of tea soaking in my view that seems to change each day in some small nuance.

But I know that there are other seasons.Seasons of intense ministry, like when I am in the middle of preparing for some international travel, which I know is just around the bend.

Seasons of total blahs when I feel like I’m in a funk emotionally and spiritually despite doing all the things I normally do, sometimes despite trying even harder to connect.

And seasons where all of this is mixed up together.

They all come and go.Just when we think we’re bored with life, something comes that shifts the whole thing on its side.Just when we can’t believe how blessed we are, well, sometimes a crisis rears its ugly head and the blessings are magnified in comparison.And sometimes when we just can’t imagine walking through that hard thing for one more moment, light breaks through in splinters and it reminds us that we’re not alone, that this thing of ours won’t last forever, that we can get through it because we’ve gotten through worse just a season or two before.

Seasons. They come and go. They remind us, hopefully, to enjoy whatever one we’re in. They remind us that they won’t be sticking around indefinitely. I don’t know what season of life you find yourself in right this moment, but allow me the pleasure of gently reminding you that we aren’t in control, but there is Someone who has set the whole thing spinning and will hold us in His hand no matter where we find ourselves. And this season will be changing…maybe sooner than you think.

Ecclesiastes 3:1 There is a time for everything, and a season for every activity under heaven…