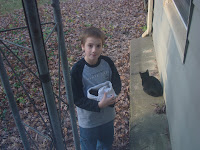 There are a lot of things that I do in life that, come to think of it, bring forth either zippo results or nothing like I had hoped.

Let’s see.Anti-aging facial products.Though I know myself well enough to know that I will use them til my dying day, it has occurred to me that there is no way at all to know, really, if they work in the least.

Cooking. Yes, I do need to actually feed my family, but there are times that I spend way too much time, even for me, on something that turns out, let’s just say, not so great. You know, where the kids prefer to go without dessert over having to finish the thing in front of them.

Television. I would bet that almost every moment I spend in front of the television is a colossal waste of time.

My son just did something that I fear was a complete waste of his time. We are the owners of a variety of outdoor cats. And just over the past couple days, a few of the kittens are declining. One has died. One has gone missing, along with her mother, and another is on its last breaths, we fear.

But Jack came home, saw the dying kitty and asked for permission to try to make it well again.Granted, in a heartbeat.He made the box-home that he created the night before a bit more comfortable.He brought out food and milk.Then he asked for a towel.And I watched my formerly-scared-to-pick-up-cats son reach down, pick up the dying kitten, and hold it gently in his arms for probably ten minutes, in the hopes of reviving it with his warmth and attention.

And I thought to myself, that cat will probably be dead by the morning. There’s an exercise in futility.

But wait. Even if the cat dies, was that forty-five minutes of my son’s life little more than just a waste of time? Did it do more than just put off our two-hour-long homework session?

I have a feeling it was bigger than that, no waste at all. Even if the cat doesn’t make it.

I actually had a moment where I realized that my son was fighting back death because there is something in him that knows that death is not right.That kittens shouldn’t die.That life is worth caring for, fighting for.

I do many things that are an actual waste of time.

I do many things that I think are important but aren’t in the least.

I pray. I write. I read. I hold hands. I send notes. I rub backs. I worship. I cry. I laugh. I hope. I long. I cling. And my son holds kittens that are dying hoping that they won’t.

Call these exercises in great good, albeit sometimes invisible.