It’s Hard to Be a Kid 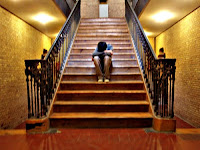 As previously stated, my Jack is having a tough time these days.Overall, I need to say, he’s doing 90% better than the first couple weeks of school.He knows where his locker is and his combination, and how to get to all of his classes (he’s got that down pat days before the quarter and his schedule changes!), and his grades are better than perhaps they’ve ever been.

So, what’s the deal? I called in reinforcements – the sixth grade counselor – to see what she could dig up. And it seems it’s two things.

He hates Mondays. And she said to me, “Who doesn’t? I hate Mondays.” She told me that as soon as she told him that she practically has a line of sixth graders on Mondays who need to see her, that she has a standing appointment with one little girl who gets off the bus crying every Monday and goes directly to her office, that she herself hates Mondays, his disposition changed. “Really?” he said. “Really,” she promised. “Mondays are just hard. And you can come see me each Monday if that’ll help.”

Issue number two.He feels he doesn’t have any friends at school.This is a huge thing to any kid.Heck, it’s a huge thing to adults too.I think this is one of those universal truths.We all remember feeling friend-less at some point in our growing up years, and we all remember the relief that settled into our bones when we realized we had someone to call our own.

So his counselor asked him to name a few kids he’d like to get to know better. She then orchestrated that they sit together at lunch and made sure he was okay. Like I said, I like this woman.

Here’s some back story. The day before in one of his classes, the students did their daily five minutes of free writing and then a kid volunteered to read his outloud. He talked about going to All Night Riot at his church that weekend. Jack perked up at this. A) the kid said “church” and B) the kid said “All Night Riot” which may not mean anything to the average joe but Jack knew that was OUR church. So my shy boy walked up to him after class and they talked about how the go to the same church, just different campuses. “I go to the Blackberry Campus. Do you go to St. Charles or DeKalb?” Jack asked. Hysterical that my kid knows the campuses. Anyway. So of all the kids he listed off, this is the one he wanted to have lunch with.

He didn’t ask to sit with a super-cool kid or a funny kid or his old friends who maybe haven’t treated him the best lately, he asked for the church kid, and the counselor made it happen. (This, ladies and gentlemen, is how Jesus rolls, by the way.) Now, I’m not saying this is his new best friend and they’ll be best friends into old age, but that’s not even the point. He got through yesterday with some hope and he wasn’t dreading today. That’s saying something.

So the prayers that have been prayed on my son’s part have been so appreciated…and here’s proof that the heavenlies do in fact shift and strain and go to work on our behalf…even for something like a sad sixth grade boy who just wants a friend. Which means in turn, He just might go to work on your behalf too. So, why not try handing your thing over?

If this post helped you, “Moving On as a Christian Single Mom” is for you, found here.