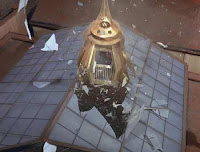 There is no fear in love. But perfect love drives out fear, because fear has to do with punishment. The one who fears is not made perfect in love.

I don’t understand this verse. What does fear have to do with love?

I do not consider myself a fearful person. I used to be, perhaps. Quite the worrier. But then I started doing things, like, you know, public speaking and going to third world countries that were dangerous and stuff, and now I know that I can really do anything through Christ.

Okay, but here’s the thing. I have a couple mini-phobias:

I’m not a fan of glass elevators.

Or heights in general.

Or coming home to a dark, empty house.

Or sleeping in my own home when no one else is there.

Or driving on two-lane roads. (By the way, this one started because an old friend was telling me that it was much more dangerous, actually, to drive on two-lane roads than interstates. That was his effort at putting a stop to my then interstate-driving fear. It worked. But only by transference, I’m afraid.) Specifically at night. More specifically those that are 55 miles an hour. Most specifically Route 47, which is right by my house, so I need it to get to about fifty percent of my life.

I think that’s it. I maybe don’t like snakes, but I rarely see those, so not worth mentioning on the list.

Now, I know that this may sound immature. In fact, when I told someone about the two-lane highway new fear of mine (which, by the way, can be justified by what seems to be an inordinate number of accidents within ten minutes of my house lately), the response that I got was, judgmentally, “What’s there to be afraid of Route 47?” Never mind, I said.

But here’s the thing. Though I have mini-phobias, I still make myself go in glass elevators and up high and on escalators and sleep in my house alone and walk into a dark, empty house, and drive on 47.

Because I have a bigger fear. That if, just once, I accommodate any of those mini fears, I will accommodate it the next time, and the next time. And then I won’t, you know, go up and down in public. And I won’t come home at night. And I won’t drive to fifty percent of my life anymore. So I don’t accommodate. I just do the thing. The yucky, scary, I feel like a five-year-old thing.

In fact, this Friday, I get the wonderful opportunity to do several of these all in one night. Yippee. I almost cancelled because I was scared, but that judgmentally snotty retort about 47 made me decide to face my fears.

And so maybe this is, in part, what this verse means. I know I am loved. With an over-the-top kind of love. And though I’ve been around long enough to know that just because my Creator loves me does not mean He will not allow bad things to happen to me, I know that I’m held through whatever might happen. And so, maybe because I’m loved and know it to my core, and know that I’ll be held come what may, I can do those yucky, scary things. I can maybe even still be a little scared doing them, just as long as it doesn’t stop me. Because then fear would win out, which means love would not. And I’m not okay with that.

So, hand me the car keys, point me to the nearest escalator, and you just watch me walk into the fear, and not away from it.